I create art as a means to experience and share personal, intimate revelations concerning the nature of reality. The creative process keeps me connected to my inner source of wisdom. – Katherine Josten 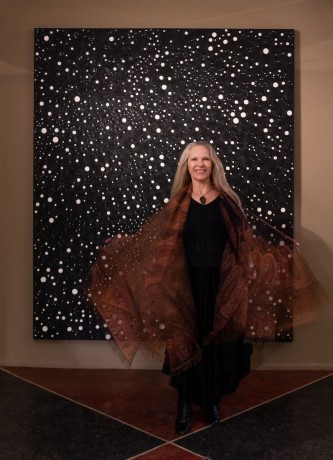 Josten’s body of work, Origins, begun in 1981, is a continuing installation involving large-scale paintings, poetry, and sculpture expressing three main ideas: We Are All One, There Is No Death, We Are Not Alone. The body of work itself is a gestalt. Each piece has the integrity to stand alone; however, together the poetry and the visual art speak in a way that contain far more meaning than the sum of their separate parts. The images and poetry are multi-dimensional, operating on many levels—from the far reaches of the abstract beyond dream reality to the representational symbolism of physical reality—integrating many visual levels.

Origins grew out of an intense personal experience which happened when Josten was in her early twenties. “At that time my consciousness was drawn into a swirling vortex of energy, of tremendous speed and power. I was terrified. I knew that I was leaving this reality/dimension and I had the instinctual fear that I wouldn’t be able to return. All of my perceptions were heightened far beyond what I knew to be possible. During that experience I received knowledge concerning the interrelatedness of the universe and my own personal reality. It greatly expanded my awareness concerning issues of time, space and energy. It showed me that we are all one energy vibrating together. That experience was so visually intense and personally expansive that I decided to use art as a means to continue exploring reality and sharing my discoveries.”

Katherine Josten’s art, Origins, crosses boundaries between science and metaphysics, bridging gaps between the philosophical and physical. It’s concerned with connection, relationship and center and with an understanding that the center is everywhere. Each point is a threshold between what is and what is coming into being—an opening into other dimensions.

In 1993, Josten founded the Global Art Project for Peace as a way to make these philosophical ideas and visions of energy real in the world through the interaction of people—adding a new public dimension to her art.